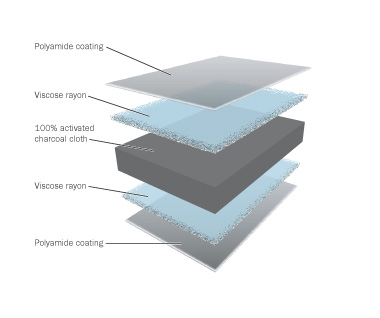 CliniSorb is a sterile activated charcoal cloth which is sandwiched between layers of viscose rayon and coated with polyamide. The polyamide coating stops the dressing from adhering to the wound surface and fibres from coming away from the dressing.

CliniSorb can be used to control odour for a range of wounds such as, pressure ulcers, leg ulcers, diabetic foot and fungating wounds. It can be used in both moderately and lightly exuding wounds, the latter with the addition of a separate primary dressing to prevent adherence.

Traditionally it has been believed that CliniSorb should only be used as a secondary dressing and that its effectiveness would be reduced when it became wet. Pilot studies carried out on 20 patients concluded that those nurses who used CliniSorb as a primary layer commented that malodour either improved or remained the same. Therefore using CliniSorb as a primary layer does not affect the malodour controlling properties of the charcoal dressing.

Both sides of CliniSorb are identical therefore it can be used either side down. It is soft and flexible and can be cut to conform to curved body sites. It can be reused for up to a week thus making it a very cost effective charcoal option.

CliniSorb is available in three sizes and can be cut to size without loss of performance.